Having lived in the Washington area for more than three decades, I have many friends who work for the federal government. Most of them will privately admit that they are very lucky since federal salaries and benefits are considerably higher than what they could earn in the private sector. And they’ll also admit that there’s lots of featherbedding, inefficiency, and waste where they work.

While I like my buddies, I don’t think it’s fair that taxpayers around the nation (particularly those with modest incomes) are sending so much money to Washington to subsidize overly generous compensation packages for a bloated federal bureaucracy.

President Trump on Monday ordered an across-the-board employment freeze for the federal government, halting hiring for all new and existing positions except those in national security, public safety and the military. In the two-page order, Mr. Trump said the directive was a stopgap way to control the growth of government until his budget director recommends a long-term plan to significantly reduce the federal work force through attrition.”

But keep in mind this is just a tiny step in the right direction.

First, it only addresses part of the problem.

For instance, most bureaucrats are at the state and local level, often carrying out mandates, regulations, and spending of the federal government.

The Wall Street Journal put together a good summary of the situation back in 2014. 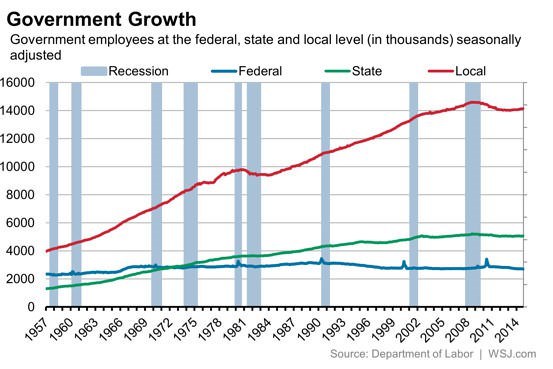 And exactly how many people are technically private employees but actually get their pay from federal taxpayers? Well, because the federal government is so big and bloated, we don’t have an exact number.

Indeed, as reported by Government Executive, there’s not even an official inexact number.

How many contractor employees does the federal government rely on, at what cost per person, and how does that compare with the cost of assigning the same task to a full-time hire? When asked by Rep. Chris Van Hollen, D-Md., ranking member of the House Budget Committee, the Congressional Budget Office took a shot but left the $64,000 question unresolved. “Regrettably, CBO is unaware of any comprehensive information about the size of the federal government’s contracted workforce,” the nonpartisan analysts wrote in response. “However, using a database of federal contracts, CBO determined that federal agencies spent over $500 billion for contracted products and services in 2012.”

But we do know that it’s a very big number. An outside expert crunched the data and concluded that there are 5-1/2 contractors for every federal bureaucrat.

In other words, as I explain at the end of this video, the correct pay for many federal bureaucrats is zero, for the simple reason that their jobs shouldn’t exist.

This is why I explained a few days ago that the real goal for the Trump Administration should be program terminations. The new hiring freeze is good, to be sure, but it’s largely a symbolic gesture.

And that’s not going to solve our very big problem.

P.S. Though the problem is even bigger in Europe.

P.P.S. A study from the European Central Bank found that excessive pay for bureaucrats undermines entire economies by breaking the link between compensation and productivity.

P.P.P.S. If you want some bureaucrat-themed humor to make all this bad news more palatable, these posters and this video are the place to start. And if you want more, here’s a joke about an Indian training for a government job, a slide show on how bureaucracies operate, a cartoon strip on bureaucratic incentives, a story on what would happen if Noah tried today to build an Ark, and a top-10 list of ways to tell if you work for the government. I also found a good one-liner from Craig Ferguson, along with some political cartoons from Michael Ramirez, Henry Payne, and Sean Delonas.

P.P.P.P.S. I laughed when I read about this, but it’s more gross than funny.

The Perpetual Failure of ObamaCare and Single Payer Healthcare