What the U.S. Can Learn from Canada’s Economic Freedom

Canada is now one of the world’s most economically free nations thanks to relatively sensible policies involving spending restraint, corporate tax reform, bank bailouts, regulatory budgeting, the tax treatment of saving, and privatization of air traffic control. Heck, Canada even has one of the lowest levels of welfare spending among developed nations.

So when I saw a column in the Atlantic, suggesting that America can learn from Canada, I was instantly intrigued.

But it turns out that the author, Jonathan Kay, was more interested in extolling the virtues of big government rather than boasting about his nation’s economic reforms.

He starts by grousing about sub-par infrastructure in America.

There hasn’t been a new major airport constructed in the United States since 1995. And the existing stock of terminals is badly in need of upgrades. Much of the surrounding road and rail infrastructure is in even worse shape (the trip from LaGuardia Airport to midtown Manhattan being particularly appalling). Washington, D.C.’s semi-functional subway system feels like a World’s Fair exhibit that someone forgot to close down. Detroit’s 90-year-old Ambassador Bridge – which carries close to $200 billion worth of goods across the Canada-U.S. border annually – has been operating beyond its engineering capacity for years.

I have little doubt that America has serious infrastructure problems, particularly in big cities (such as New York, Washington, and Detroit) where spending decisions are driven by a desire to line the pockets of unionized bureaucrats rather than to provide services to taxpayers.

But is the United States really some sort of third-world backwater compared to our northern cousins? A few years ago, I looked at data from the World Economic Forum’s Global Competitiveness Report to see how the United States was ranked for infrastructure and discovered America was in 12th place. Which was higher than Canada’s 15th-place ranking.

But maybe things have changed since 2014. So I perused the most recent rankings. Lo and behold, the United States actually jumped one spot, to #11, while Canada remained in 15th place. 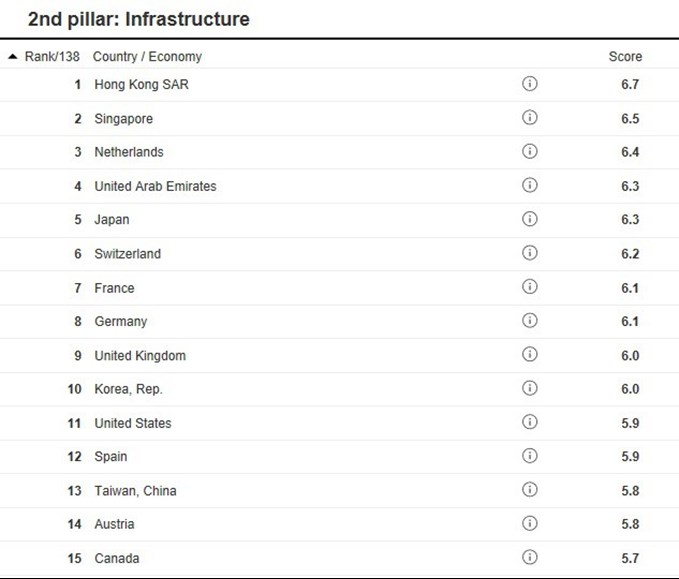 I don’t want to imply that the United States has good infrastructure policy. As far as I’m concerned, increased federal involvement has caused our system to become somewhat dysfunctional.

But since Canada ranks even lower, perhaps Mr. Kay shouldn’t be throwing rocks in a glass house.

What makes his error noteworthy is that he then tries to argue that America’s supposedly inferior infrastructure is the result of inadequate taxation.

The United States is falling apart because – unlike Canada and other wealthy countries – the American public sector simply doesn’t have the funds required to keep the nation stitched together. …The Organization for Economic Co-Operation and Development (OECD), a group of 35 wealthy countries, ranks its members by overall tax burden – that is, total tax revenues at every level of government, added together and then expressed as a percentage of GDP – and in latest year for which data is available, 2014, the United States came in fourth to last. Its tax burden was 25.9 percent – substantially less than the OECD average, 34.2 percent. If the United States followed that mean OECD rate, there would be about an extra $1.5 trillion annually for governments to spend.

The obvious implication of Mr. Kay’s column is that a much bigger tax burden would lead to much better infrastructure.

Yet if that was the case, then why does the United States rank above Canada?

Heck, I also want to ask why Mr. Kay to explain why the low-tax outposts of Hong Kong and Singapore ranked #1 and #2 for infrastructure?

By the way, none of this is an attack on Canada. Indeed, if you look at Economic Freedom of the World, you will see that Canada has passed the United States and now has more economic liberty. Or perhaps it would be more accurate to say that America’s score dropped faster and farther than Canada’s score. In any event, Canada is now ranked #5 and the United States is #16. 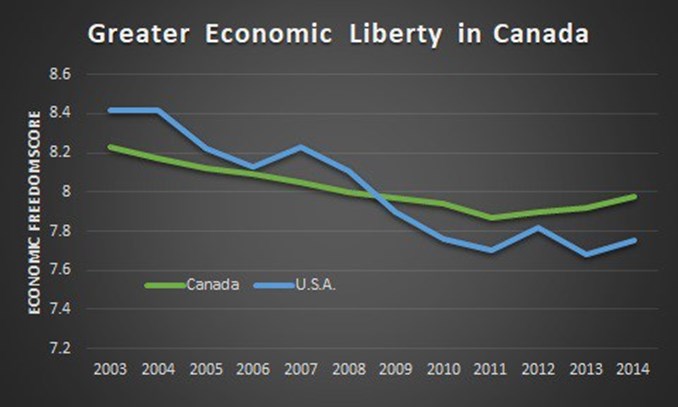 In other words, there is much to admire in Canada. And much to copy.

But Mr. Kay apparently doesn’t want America to mimic pro-market reforms. Instead, he thinks the lesson to be learned is that there should be higher taxes in the United States.

The Price of Civilization

Let’s look at two final excerpts from his column, starting with his observation about the joy of taxation.

It’s really quite simple: When Canadian governments need more money, they raise taxes. Canadians are not thrilled when this happens. But as Justice Oliver Wendell Holmes Jr. put it, taxes are the price paid “for civilized society.”

I can’t resist pointing out that Justice Holmes made his point about taxes and civilization back when the federal government only consumed about 5 percent of economic output. As I wrote in 2013, “I’ll gladly pay for that amount of civilization.”

And the final excerpt implies that the business community in Canada doesn’t mind taxes.

…when I recently interviewed Canadian business leaders about the challenges they perceive, the word taxes didn’t get mentioned much.

Since the federal corporate tax rate in Canada is 15 percent, far lower than the 35 percent federal corporate rate in the United States, I’m not surprised that Canada’s business leaders no longer think taxes are their biggest problem. So why doesn’t Mr. Kay argue we should copy that feature of the Canadian system?

Sigh. I joked back in 2012 that supporters of small government in the United States might want to escape to Canada because of all the market-oriented reform. These are the changes that Mr. Kay should be extolling.

P.S. I’m surprised Mr. Kay didn’t advocate that we copy Canada’s government-run health system. You know, the one that is so wonderful that a Canadian politician escaped to the U.S. for surgery while leaving ordinary Canadians stuck in long waiting lines.

P.P.S. To close on a light note, here’s a satirical article about American leftists trying to escape to Canada after the 2010 elections.