What Other US States Can Learn from Illinois’ Imminent Fiscal Meltdown

Illinois is a mess. Taxes and spending already are too high, and huge unfunded liabilities point to an even darker future.

Simply stated, politicians and government employee unions have created an unholy alliance to extract as much money as possible from the state’s beleaguered private sector.

That’s not a surprise. Indeed, it’s easily explained by the “stationary bandit” theory of government.

But while the bandit of government may be stationary, the victims are not. At least not in a nation with 50 different states.

Indeed, Illinois Policy reports that a growing number of geese with golden eggs decided to fly away after a big tax hike in 2011.

…The short-term increase in tax revenue gained from higher tax rates is offset by the long-term loss of substantial portions of Illinois’ tax base. The average income of taxpayers leaving Illinois rose to $77,000 per year in 2014, according to new income migration data released by the IRS. Meanwhile, the average income of people entering Illinois was only $57,000.

…During the four years of the full income-tax hike, prior to its partial sunset in 2015, Illinois lost $14 billion in annual adjusted gross income, or AGI, to other states, on net.”

Illinois has always had an unfavorable ratio when comparing the incomes of immigrants and emigrants. But you can see from this chart that there was a radically unfavorable shift after the tax hike. 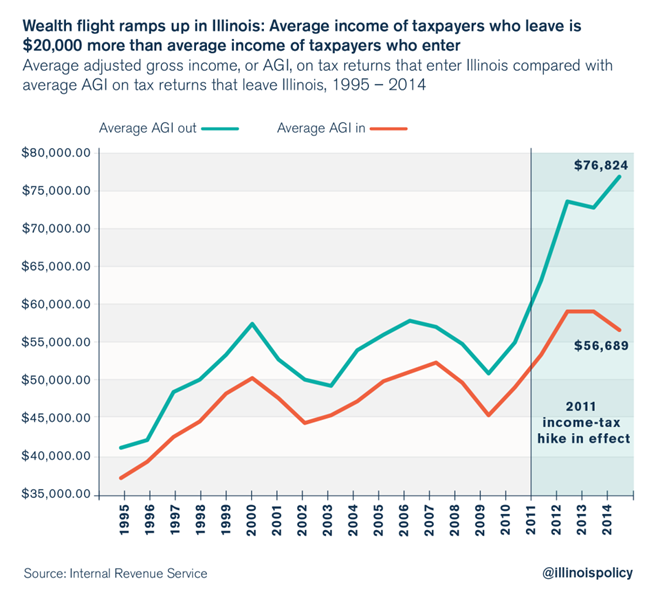 Here’s a table from the article showing the 10-worst states.

Illinois leads this list of losers by a comfortable margin. Connecticut, meanwhile, has a strong hold on second place (which shouldn’t be a surprise). 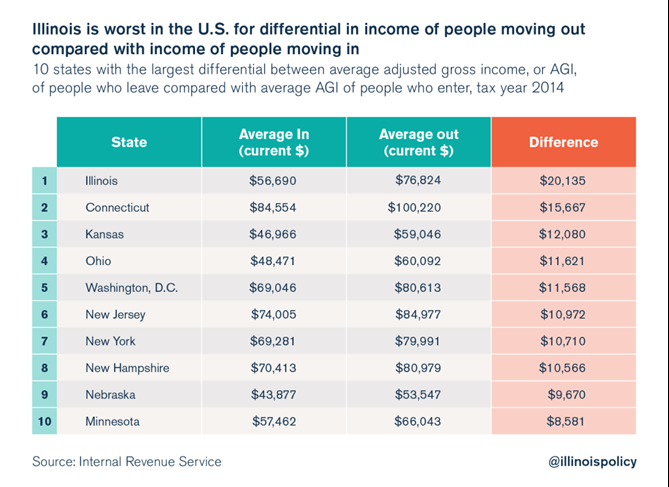 The IP report observes that the states benefiting from internal migration have much better fiscal policy. In particular, most of them are on the admirable list of states that don’t impose income taxes.

“…the top five states with favorable income differentials were Florida, Wyoming, Nevada, South Carolina and Texas. Notably, 4 of 5 of these states have no income tax, and none of them have a death tax.”

It’s worth noting that the high-tax approach is not producing good results.

Instead, as reported by Bloomberg, the Land of Lincoln is the land of red ink.

“Illinois had its bond rating downgraded to one step above junk by Moody’s Investors Service and S&P Global Ratings, the lowest ranking on record for a U.S. state…Illinois’s underfunded pensions and the record backlog of bills…are equivalent to about 40 percent of its operating budget. …investors have demanded higher premiums for the risk of owning its debt. Moody’s called Illinois “an outlier among states” after suffering eight downgrades in as many years. …like other states, has no ability to resort to bankruptcy to escape from its debts. A downgrade to junk, though, would add further financial pressure by increasing its borrowing costs.”

Amazing, in spite of this ongoing meltdown, the Democrats who control the state legislature are pushing hard to once again increase the income tax.

Heck, they want to increase all sorts of taxes. Including higher burdens on the financial industry.

Kristina Rasumussen, the President of Illinois Policy, warned in the Wall Street Journal that this was not a good recipe.

Proponents here call it the “privilege tax.” …The Illinois bill would put a 20% levy on fees earned by investment advisers. It passed the state Senate in a 32-24 vote Tuesday, and backers are hoping to get it through the House before the legislative session ends May 31.The new tax is pitched as a way to squeeze more revenue – as much as $1.7 billion a year – from hedge funds and private-equity firms…

An earlier version of the Illinois proposal included a provision so that the 20% tax would take effect only if and when New York, New Jersey and Connecticut enacted similar measures. But the bill as written now would impose the tax regardless, and lawmakers will simply have to hope other states follow suit. Yet who says financiers can’t do their jobs just as well in Palm Beach, Fla. – or London, Zurich or Hong Kong? The progressives peddling this idea don’t understand that Chicago competes for these businesses not only with New York and Greenwich, Conn., but with anywhere that can offer cellphone service and an internet connection.

…Railing against supposed “fat cats” might satisfy progressive groups, but lawmakers shouldn’t be in the business of hounding the people who help connect capital with new opportunities for growth. …Rather than focus on how to make everyone miserable together, policy makers should work to increase their states’ competitiveness. A start would be to rally against this proposed privilege tax and instead fix the spiraling pension costs and outdated labor rules that are dragging Illinois and other blue states down.

Let’s hope the governor continues to reject any and all tax increases.

If he does hold firm, he’ll have allies.

Including the Chicago Tribune, which recently editorialized about the state’s dire position,

“Illinois legislators fumble repeated attempts to send a balanced budget to Gov. Bruce Rauner; while the stack of Illinois’ unpaid bills climbs by the minute; while our leaders prioritize politics over policy… Employers and other taxpayers are hopping over Illinois’ borders with alarming regularity.

…What an embarrassment. What a dereliction of duty. …Illinois, boasting the lowest credit rating and the highest population loss of any state in the country, has doubled down. State government is in a full-blown crisis. Again. Since January, Democrats have discussed plans to raise income taxes and borrow money to pay down bills. They approved bills that would make Illinois a less attractive place to do business; under one proposal, Illinois would have the highest minimum wage of all its neighboring states.”

This is some very sensible analysis from a newspaper that endorsed Obama in both 2008 and 2012.

Hope for the Future

Even more important, the state’s taxpayers are mostly on the correct side.

…Survey respondents were also asked what they think of political candidates who support raising taxes to end the budget impasse. The poll found that likely Illinois voters will be unforgiving of candidates for governor or the General Assembly who raise the state income tax or sales tax.”

I suspect taxpayers realize that higher taxes will simply lead to more spending. 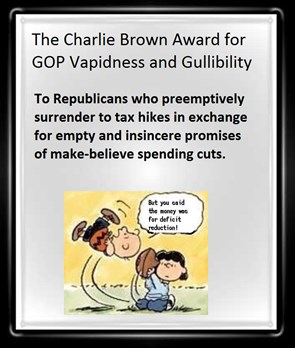 Indeed, a leftist in the state inadvertently admitted that the purpose of tax hikes is to enable more spending.

If there is to be any hope for the future in Illinois, Governor Rauner needs to hold firm. So long as Republicans in the state legislature hold firm, he can use his veto power to stop any tax hikes.

Or he can be Charlie Brown.

P.S. Illinois is invariably near the bottom in comparisons of state fiscal policy. The one saving grace is that the state has a flat tax. If the statists ever succeed in replacing that system with a so-called progressive tax, it will just be a matter of time before the state passes New York and California in the real race to the bottom.

Only Free Markets and Popular Conservatism Can Help the World’s Poorest: Daniel Hannan